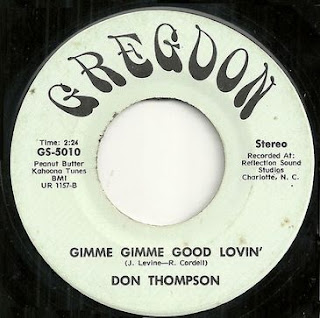 "Gimme Gimme Good Lovin'" is a song written by Joey Levine and Ritchie Cordell and recorded by Crazy Elephant. It reached #12 on the Billboard Hot 100.

Presumably Gregdon were Don Thompson's own label, the Greg being quite probably Greg Caruso (1947-2019). The UR master number would indicate a 1978 pressing?

A previous record on Gregdon (#5008) is by the Don Thompson Trio (recorded in South Carolina at Skyline Recording Studio, West Columbia).