I Know The Lord 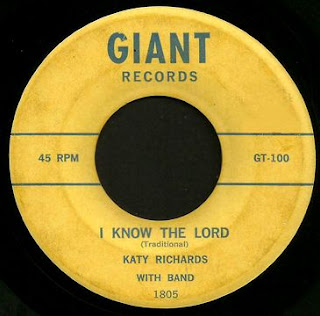 I Know The Lord

This is the same Giant label founded in Texas by Bill Beasley, when he moved there from Nashville for a short period of time in 1957/1958, with his wife Jean Norris. In Tennessee, Bill Beasley previously operated the Tennessee and Republic labels. Katy Richards was Jean Norris' best friend. Her name is later found on some other Beasley's labels such as Hit, Country and Western Hits and Modern Sound. But these later songs were possibly by a different singer using her name, (the voice sounds quite different),  just as it was also used as a pseudonym for Bill Beasley at some point when he composed songs.
Artists recorded by Beasley when in Texas were : Jay Holiday, Dave Baucom, Ben Sharon, Don Eee and Johnny Houston & the Capitals.
Posted by Bob at 6:06 PM