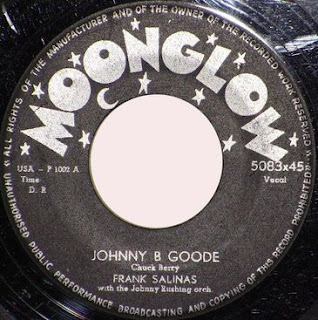 
Two "hit of the day" covers by the unknown Frank Salinas backed by the equally unknown Johnny Rushing orchestra. Same track of Johnny B. Goode also issued on Tops Records as by Steve Todd while Witch Doctor has been issued in France as by the Allegrettes on the Pacific label. I wouldn't be at all surprised that the Witch Doctor track also came on Tops Records as by Ross Barbour

Addenda (2 July 2020) : obviously something more powerful than me and you has his hand on the file sharing thing.  OpenDrive and Mediafire don't allow any direct download for these two Frank Salinas files. So, Amazon has the right to sell something they probably don't own?