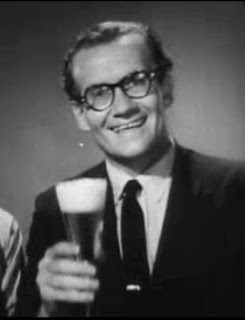 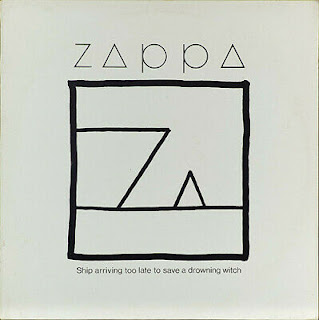 Ship Arriving Too Late to Save a Drowning Witch
The cover art for the Frank Zappa album shows the classic Droodle, by Roger Price

Roger Price was a curmudgeon in
every sense of the word. He was also an
artist, humorist, satirical philosopher,
writer, one of the owners and operators
of pss! (Price/Stem/Sloan, a publishing
company), and an ex-husband to a
juggler (among several other wives).

Roger was bom in 1918, and grew up
in farm country in Charleston, West
Virginia. He said he was so busy
studying everything at an early age that
he never had much time to go to school.

After hating the University of
Michigan and an art school in Chicago
(he thought teachers, like publishers,
couldn’t be trusted), he moved to
southern California and became an actor
in radio shows as well as a gag writer
for Bob Hope. He then worked on a
Broadway revue in New York called
Tickets, Please , while lecturing in clubs
on his views of American culture.

During this time he lived in a ritzy
New York penthouse, which he
managed to convert into a West
Virginia-style farm house. He referred
to the high-rise balcony as his porch. He
roomed with a snarling monkey who sat
on his shoulder whenever he greeted his
guests at the front door. The sharp-
toothed simian was known to bite
certain guests at its discretion.

Roger also became a weather man on
a television station in New York. He
would get so wrapped up in chatting
with the folks out in T.V. land that
many times he forgot to give the
weather. Finally, on one blistering
summer day, he comically announced he
was organizing a party that would go to
Canada that afternoon to bring some
snow back to the city. Many viewers
took him seriously, and hordes of
people gathered outside the station,
waiting for Roger to lead the way. The
station became fed up with Roger and
Fired him. He moved to Los Angeles.

Steve Allen said he began his
admiration for Roger in 1948, when
Roger was performing as a comedian at
a nightclub in Los Angeles. Allen said
some drunk heckler was “totally
lousing up Roger’s low-key but very
funny act.’’ So Roger stepped off the
stage and punched him.

Among his many humorous and
high-brow projects, three of his most
notable creations were The Great Roob
Revolution, Droodles, and “Avoidism.”

In The Great Roob Revolution , Roger
defines Roobs as a class of Americans,
which, like supermarkets, are a
phenomenon of the United States. Roger
explains that Roob comes from the word
rube (from Reuben), which is what
carnival employees used to call the rural
carnival-goers. When American farmers
and country bumpkins attended the local
carnivals, they would yuk it up with
booze and brawls, and the carnival
employees would cry out, “Hey, rube!’’
in exasperation.

Although these rubes were a bit too
boisterous during these local gatherings,
they were basically thought of as loyal,
courageous, honest folks with a strong
sense of pride. It wasn’t until they
decided to move out of the backwoods
and into the cities that rubes became
misplaced. They then began to act as
they did at the carnivals: loud and
pushy. And thus the Roob was bom.
Roger has three Roob Laws, and they
are: 1) “If everybody doesn’t want it,
nobody gets it;’’ 2) “Mass man must be
served by mass means;’’ and 3)
“Everything is contagious.’’

Roger explains that the Roob is not
the cause but the result of “mass
culture, with its mass government, mass
traffic, mass fads, mass morality and
even mass eccentricity and mass
dissent.’’ .

The Roob is strongly affixed with
California, and Los Angeles is “the
symbolic home of the Roobs.*’ In fact,
they would subconsciously like to
transform the whole world into one
large California Carnival. The Roob
loves TV (the Roob tube), and thinks
everything is put on this earth for
his/her pleasure. It’s all just show
business.

To eat, Roobs enjoy instant anything,
fried anything with ketchup, barbecued
anything, and hamburgers, hamburgers,
hamburgers. But come any special
occasion, it’s steak and only steak.

Hobbies to which Roobs are addicted
are: 1) disaster gawking (thousands of
Roobs will suddenly appear at the scene
and will stare for hours at the place
Where It Happened); 2) bowling; 3)
building stuff (inherited from the classic
rubes) such as patios and hi-fi units; 4)
sportsbiz (watching more than actually
playing - letting someone else do it); 5)
seduction (done with alcohol and
drunken persuasion); and 6) taking a
vacation or weekend trip to an over
crowded, overpriced resort., otherwise
known as the Roobmove.

Roger’s book gives a detailed account
of every aspect of the Roob’s life, from
their speech patterns to their sex
patterns. He ends his book with a final
statement, “Just in case it hasn’t
occurred to you, Roobs are not Other
People.’’ Although the Roob’s life may
not always (or ever) be an attractive
picture, it would be hard for anyone not
to find themselves at least a little
Roobish. Heck, if you can’t beat ‘em,
join ‘em.

Roger called Droodles “an art book
that fights back.’’ Actually, it’s a
collection of his invented “Droodles’ ’
that over 165 newspapers featured. A
Droodle, according to Roger, is a
sub-art form which “gives the Beginner
a concrete method of Wasting Time that
might otherwise be used in some
dangerously constructive pursuit.”

One of Roger’s many philosophies or
theories was “Avoidism,” which is
thoroughly explained in In One Head
and Out the Other. But simply put,
Avoidism is a simple philosophy in
which one simply avoids things. This
way, an Avoidist avoids Involvement,
which is where all human’s troubles
begin. Roger quotes Descartes as
saying, “I think, therefore I am.” He
then quotes the Avoidest as saying, “I
won’t, therefore I ain’t gonna.”

Modem primates suffer because of
their quick and compulsive Involvement
in plans, schemes, and actions,
according to Roger. He says this leads
to anxiety, frustration, and finally
Neurosis. Who needs that? An Avoidest
will tell you none of that is necessary.


When threatened with a situation that
requires a decision or action, just find
the nearest couch and promptly take a
snooze.

Other works by Roger include: I'm
For Me First!, The Decline and Fall ,

The Upright Ape, Mad Libs, You,
Non-Quotes , What Not to Name the
Baby, People Games, and ZAP!