Secret Of Losing The Blues 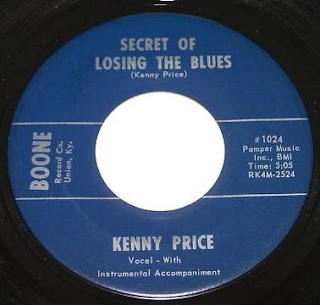 Secret Of Losing The Blues

Few today remember Kenny Price as a country music recording star for Boone and RCA records. A solid journeyman performer, known as ‘The Round Mound of Sound’, he charted 34 singles during his 15 year chart run, but never had a number one record.
This is his first solo single since his two singles for X Records (a RCA subsidiary) issued nine years earlier in 1955. Few discographers seem to be aware of the singles he recorded as a member (and leader) of the Hometowners on Sage, Fraternity and King records.

Standing six-feet tall and weighing well over 300 pounds, Kenneth James Price is remembered by fellow performers and fans alike as one of the nicest individuals to ever sing a country song.