My Kind Of Guy 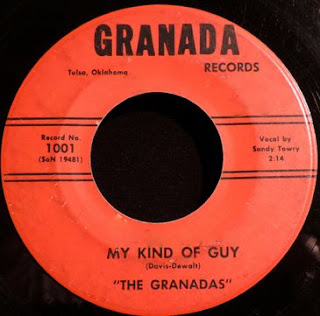 The Granadas
Vocal by Sandy Towry

My Kind Of Guy

William P. Davis & Chuck Dewalt, the composers of "My Kind Of Guy", were most probably members of The Granadas.

Johnny Cale had made two singles with the Chan label in Oklahoma City at Gene Sullivan’s HiFi Studios in 1960 and 1961 and this obviously fired up the imaginations of many a local Okie about the possibilities in the music business. Davis was one of those influenced and in 1962, he finally got a new role model in soul singing sensation James Brown who performed at the Tulsa Civic Center. From then on, Davis started singing more soulful songs and wearing tight outfits, emulating the future ‘Godfather of Soul ‘. Davis then finally quit his job as a butcher.

Bill Davis set-up a fledging recording studio in his garage at home sometime in 1965. In late 1969 his studio, which was called Derrick, moved to a larger premises and incorporated as Granada Enterprises with business partner Dale Watts. Davis and Watts, who was a qualified teacher, kept the business going with funds from their own careers and established a studio that became known as ‘the largest walk-in facility’ for local musicians.