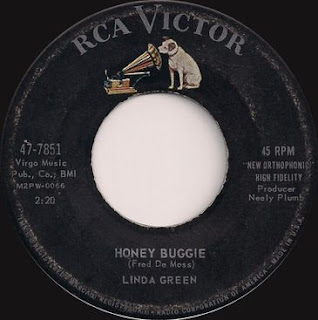 A former student of Millikan Junior High School, Linda Green of North Hollywood was discovered by Muriel Sanders and Jack Elton;  they've been coaching her for a couple of years when Ray Bolger (actor who played Scarecrow in MGM's classic The Wizard of Oz in 1939) was lucky to hear about her.  And 13-year Linda Green soon appeared in 1960 with Jerry Lewis and Ray Bolger in night club dates in Las Vegas. When she returned from a four-week stay in Las Vegas, pressure of recording and engagements soon forcing her to drop out of junior high and she attended Hollywood Professional School with such young recording stars as Cathy Young and Brenda Lee.