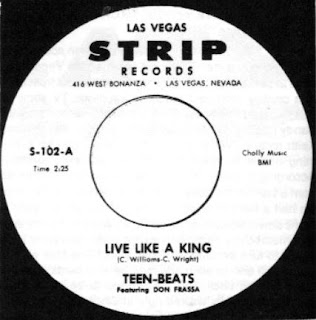 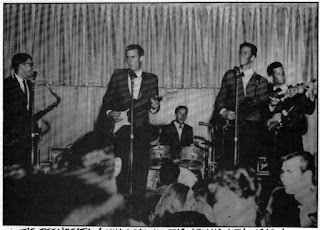 
Don [Frassa] sez of their first record sesh in '61: "Me, Larry, and Lyle went to this little recording studio caled Chollie Music in Westside, the black part of town.  It was actually this guy Chollie Wright's house and we recorded in his bedroom which was covered with egg cartons.  We didn't even have drums there.  We used a Sparklette water rack, the metal part where the jug goes in.  We were so shitty!  It took us forever to record that thing.  "That thing, as Don Calls it, turned out to be a wailin' stomper called "Live Like A King", originally written by Chollie in 1957 for the famed LA R&B group the Twilighters who cut a rippin' version on Ebb.  Before relocatin' his "operation" to Las Vegas, Wright masterminded some legendary West Coasr group records on his own Cholly label. He's also to be saluted for the impossibly rare "Annie Kicked The Bucket" by The Nutones on the Hollywood Stars label.