June LaSalvia, then June Dussia, was already a nationally recognized authority in age group gymnastics when she came from Florida to Nashville, Tennessee in the mid-seventies.  She is noted as one of the first yogis in the Nashville area.

She wrote some songs in the seventies recorded by country artists such as Charley Pride, Sammi Smith or Dolly Parton's younger sister, Stella.


Aerobics music was the trend in 1982, as noted by Richard Harrington in an article published by The Washington Post (May 22, 1982) In Tone With the Music :

The fastest selling discs in any record store these days are not likely to be by Pat Benatar or Rod Stewart or John Denver; it's Jane Fonda and Richard Simmons, Joannie Creggains and Carol Hensel who are hot now.

What they're pitching are not Rocky Mountain highs, but sleek and sexy thighs. And, with the exception of Simmons, these newest recording stars aren't even singing, they're barking out instructions as direct as any marine drill sergeant: SHAPE UP! ...

And indeed, in 1982, June La Salvia recorded her own exercice program, backed by The Lean Jeans Band.  Her "Country Aerobics" album, "How The Waist Was Won", was produced by Sidney Singleton at The Singleton Sound Studios and issued on Plantation Records. 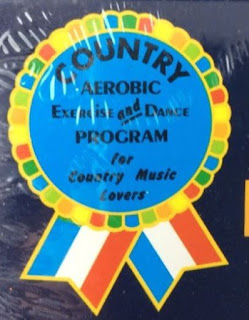