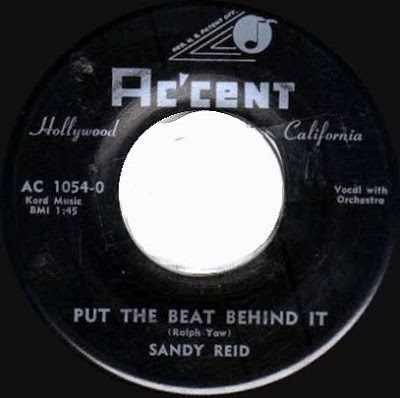 Put the Beat Behind It
Pleasant rocker with a very danceable beat is agreeably presented, but flip is stronger. (Kord, BMI)

Later in 1957, Sandy Reid had a second release on the Bakersfield located Tally Records (Tally 114 : Wotcha’ Doin’ Tonight / What A Boy). Her two records were almost certainly arranged and/or produced by Ralph Yaw.

According to Chris Kelsey :

Ralph Yaw wrote arrangements for a great many swing-era bandleaders during the '30s and '40s, including Isham Jones, Cab Calloway, Eddie Barefield, Count Basie, and Les Brown, but Yaw is best-known for his work with Stan Kenton, for whom he wrote and arranged in the early '40s.

Yaw ceased his jazz activities around 1947 and subsequently embarked on a career in country music. His "No Longer a Prisoner", a song on the Korean War theme, was a hit for singer Hank Snow (RCA Records, 1953).

He wrote straight away a follow up to the Hank Snow hit, "I’m Still A Prisoner (Of Love)" [The first armistice song", claimed the ad published by Billboard] which was released on his own Kord label. (Billy Mize sung it, backed by Bill Woods And His Orange Blossom Playboys).