Dance With The Drummer Man 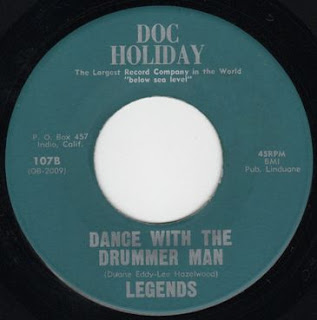 The Legends : two saxes, three guitars and one drums : Ron Anderson, Brad Ritter, Doug Donoghue, Sherman Koons, Frank Silva & Pat Shew (not necessarily in that order on the picture).  Perhaps not band regular members, the girls on vocal duty on Dance With The Drummer Man are not credited on label and not pictured on the sleeve. Too bad.

The largest record company in the world (below sea level) was owned by Irvin "Doc Holiday" Smith (1931-2009), from Charleston County, South Carolina.  Doc Holiday was a disc jockey on various radios and later a show host in Las Vegas, Nevada.  He was with KREO, Indio, Calif. when in 1962 he started his own label, releasing about eight singles in 1962 and 1963.   In his last few years, Irvin Smith owned and operated Payless Tires on Jefferies Blvd. in Walterboro (South Carolina)