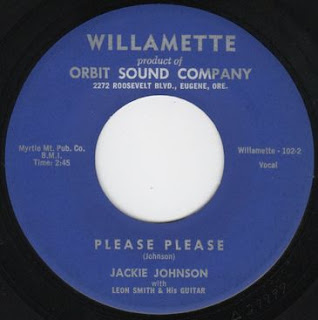 Jackie Johnson, singing an original song, was first place winner in the amateur talent show sponsored by the Medford Junior Chamber of Commerce in April 1956.  But it was'nt before 1959 that she recorded her first single. According to the Medford Mail Tribune [July 1, 1959]


Jackie Johnson, . 14-year-old former Jackson county resident, has had her first recording released under the Willamette label.  She is the daughter of Mr. and  Mrs. John Johnson, ' who lived in Eagle Point until ' moving to Eugene last month ' after Jackie completed the eighth grade.    The new recording is "Star Light Star Bright" backed by "Please, Please written by the singer and her mother.    The singer had performed with various local bands and appeared on a program over KBES-TV.  She also sang for Rogue Valley ballroom dances. According to the report from Eugene, the singer has appeared on the same programs with such stars as Hank Thompson, the Maddox Brothers and Rose, and last September toured- for a week with the Jim Reeves show.  She is now on a show staged in Eugene by Leon Smith who made the hit recording of "40 Ford."  The Johnsons will return to the valley for the week end and Jackie will sing at the Camp Corrall July 4.

Leon Smith, son of Grandpappy Smith, recorded “Little 40 Ford” and it was released in May of 1959 on Willamette, the master was sold to Columbia later that year and released on the Epic label.