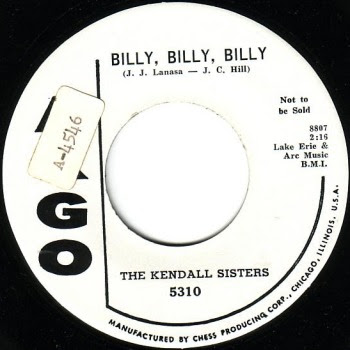 From their third release on the Chess/Checker Argo subsidiary. Produced by J. C. Hill in Cleveland (Ohio) at the Audio Recording Studio.


From the National Cleveland-Style Polka Hall of Fame :

Growing up in Pennsylvania listening to Slovenian songs emanating from their father’s accordion, Dolly and Polly Kendall came to Cleveland in 1945, taking the town by storm with their outstanding Cleveland-Style vocal stylings. Joining Ernie Benedict’s Range Riders and Polkateers, the Kendalls performed daily on radio and weekly on television for six years. In a career spanning 30 years, Dolly and Polly worked with Benedict, Johnny Pecon and Lou Trebar, Kenny Bass and the Polka Poppers, and other Cleveland-Style greats on television, radio and in person. Some of the Kendalls’ most memorable renditions were captured on record with Benedict and Bass, including "Over Three Hills," the "Jolly Lumberjack Polka," "Polka Dots and Polka Dreams," and "Beautiful Eyes."