Reesa and the Rooters : Nervous Breakdown 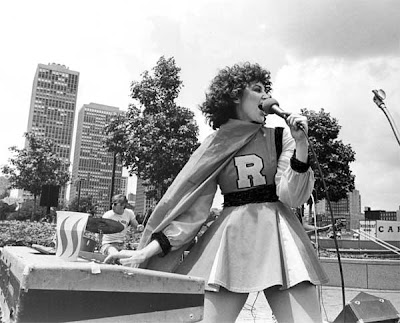 Reesa and the Rooters, Philadelphia, 1982
"Reesa Marchetti was born in Philadelphia, where she received classical music training as a child. Her family moved to Cherry Hill, N.J., when she was in grammar school. Later, she joined her high school folk music club and began playing in local coffeehouses.

In the 1980s, Reesa scored international underground punk-rock hits with two 7" vinyl singles: The Rooters' "TMI/Ultraman in Surf Villa" and "Casual Cat at a Laundromat" by her female rock trio, Suburban Wives Club. Both bands toured along the Eastern seaboard and were well known in the Philly club scene."
Reesa MySpace