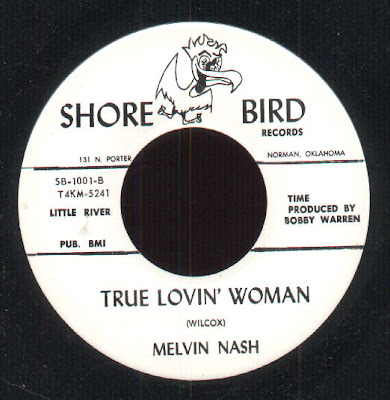 
That was the first release on the Shore Bird label :
In the mid-1960s, Bobby Warren decided to try his hand at record production and promotion. Because he found no local studios to his satisfaction, Warren built his own recording studio in the back room of Carl and Bob's Music on the corner of Porter and Grey streets in Norman, Oklahoma.. Warren used the contacts he had made while playing on radio and television programs to promote the singles and albums he released for many artists under his Shorebird and Impel record labels. Shore Bird's first release was "In Front of Your House" backed with "True Lovin' Woman" for singer Melvin Nash. This single did not sell very well but taught Warren much about the independent record distribution system. [from Oklahoma Musicians and The Broadcast Frontier, Chapter Five: The Consolidation and Corporatization of the Oklahoma Broadcast Industry]

And in 1973, Melvin Nash, was still in Oklahoma with Bobby Warren, as "he was one of the firm’s writers, and has had songs recorded by Norma Jean and Wanda Jackson."