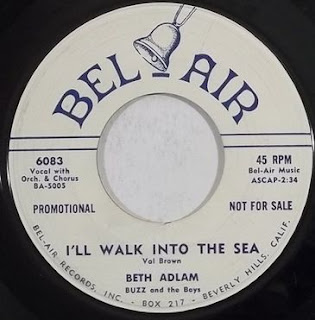 Beth Adlam
Buzz and the Boys

★
Composer of the song was Val Browne, a big band vocalist for more than 30 years, who copyrighted the song (full title "I'll Walk Into The Sea And You Won't See Me Any More") in December 1959.

Buzz Adlam, the owner of Bel-Air Records, led the backing band on his daughter's record.

Born Basil George Adlam in Chelmsford, England.  he was a composer, author, arranger, saxophonist.   Educated in Canadian public schools, he studied with Herman Genss and Albert Coates. He was a saxophonist with the Phil Harris and Ozzie Nelson bands, and arranged for and conducted the Horace Heidt orchestra.  He conducted for ABC Radio and television; was producer and music director for the US Treasury Savings Bond series 'Guest Star'.   Died in 1974 in Beverly Hills, California. 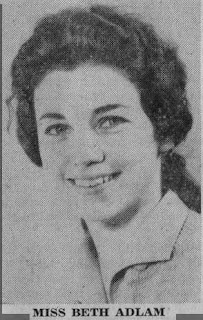 Beth Adlam was a Santa Monica City College student at the time of her recordings.  She also recorded two songs with the Pete King Chorale : "The Christmas Song" and "Have Yourself A Merry Little Christmas" issued on Kapp Records (LP "Christmas Time")

A fan of "all types of music," she claims she first became interested in a singing career while accompanying her father on recording sessions.  Her father is currently musical director at ABC and writes the background music for the Ozzie and Harriet television series. Although she likes all music, she indicates a preference for musical comedy and stage scores rather than rock and roll, "Rock and roll is losing its listeners," was her statement. "It's repetitious and not very imaginative. I believe the listeners are turning back to good music." In reference to a beginning singer's chances with a small recording company, she revealed, "If a singer has real talent, he will be seen, heard and liked by a major company. The smaller companies give a singer a break, but they cannot afford to back him after that first big hit." Future plans for the sophomore commissioner include a TV pilot film early this summer. After that, her future, "depends on what happens," but any further education will be taken at UCLA. 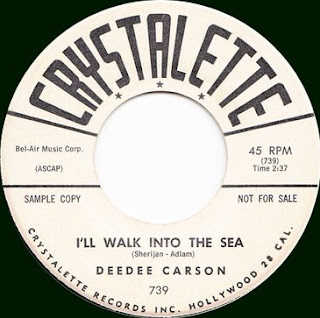 As Deedee Carson, she was signed
to Crystalette in March 1960

Composers are now shown as Sherijan and Adlam