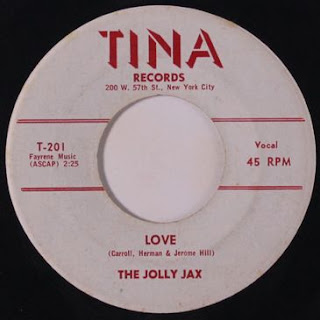 The Jolly Jax were from Baltimore and were a fixture on the club scene
there for quite a few years. Formed in 1949, by the early 60's they were
down to a trio (brothers Herman, Jerry & Carroll Hill). The Jolly Jax were used as a comedy opening act in many of the small concerts and apperances of major stars. They often were used to loosen up the crow before the feature act come on.


According to Charles, of The Tunetoppers, “Our first long standing gig was in east Baltimore at the Clover Club at Fayette and Wolfe Sts. And not only did we pack them in but just across the road was the Club Ambassador which nightly presented the equally popular Jolly Jax,” said Charles.  The Jolly Jax from Turners Station in Baltimore County, which included brothers Herman and Carroll, would for several years be the main competitors in the city to the Tunetoppers and, in fact, would often share the same bill. During that time frame of 1957, the Jolly Jax on stage would all be wearing Mouseketeer ears after their national hit, “Mickey Mouse Rock” (Teenage #1005)

Atfter their Tina release, they had two singles on Airmaster Records, the first, introducing a new dance "The Pony Shuffle"  :


The Jolly Jax, might finally have a winner on their new Airmaster record. "The Pony Shuffle." A dance of the same title has been rivaled by the Jax who won raves after demonstrating it on "The Buddy Deane Show" on WJZ - TV in Baltimore and In New Jersoy. For Pittsburghers the Jax will demonstrate the new steps on 'The Clark Race Show" on KDKA - TV, Saturday, April 13. [newspaper, April 15, 1961]


Also in 1961 also for Airmaster, they recorded a tune in honor of Astronaut Alan Shepard. entitled "Everything's A OK." They sent Shepard copies and he congratulated them personally.

1962.  On V-Tone, they recorded "There Is Something on Your Mind", issued as a two-part single on V-Tone 233. The song is a familiar one, done earlier by Big Jay McNeely and Bobby Marchan, and later by King Curtis, all of whom charted with it. The Jolly Jax version never charted, although it wasn't a bad version, except for one glaring detail. The spoken passage in Part 2, obviously meant as a joke, was, even by the standards of 1960 [edit: 1962], clearly over the line, describing in graphic detail someone murdering his girlfriend. The spoken part begins: "Mayhap you discover, that you have a contemptible girl, who is egotistical, antidisestablished and ridiculous, and refuses to abide by the laws of your abode. Go down to the pawn shop, steal a gun, a switchblade knife, and the little baby brother, the razor blade. Come back and introduce her to United States steel company....Cut her long, deep......"   From there, we'll leave it to your imagination.   [1]

Carroll Hill said. ."We consider this ridiculously funny. If anything. There was no Intention on our part of being offensive. It's the beat record we've ever had. Naturally we were disappointed when It was banned after getting off to such good start. "Mack the Knife" Is worst  than our recording. It suggests much more violence than ours, and It wasn't banned." [Jolly Jax Record Banned, The Pittsburgh Courier from Pittsburgh, Pennsylvania · April 7, 1962] 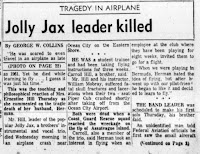 Tragedy hit them In August 1963 when Herman Hill, leader of the trio, died while learning to fly.  "He was scared to even travel in an airplane as late as 1961.  Yet, he died while learning to fly. I guess it was just his time" said "philosophically" his widow, Ernestine Hill.   According to his brother Carroll, Herman took an interest in flying when an employee at the club where they have been playing for eight weeks, invited them to go for a flight.  "when we were playing in Bermuda, Herman hated the idea of flying, but after he went up with our pilot-friend he began to like it and decided to learn to fly".


Replacing Herman for awhile were Hump Jones, a popular keyboardist and comic.  Hump Jones' can be heard on Further On Up The Road (Monticello Records)..


After a few soul singles on Ru-Jac, Landa (as The Jolly Jacks) and Cookin' and they backed Lynn Martini on Soulville, their last waxing, as far as I known.  But then the thrill was gone, I guess 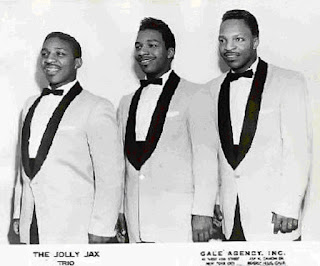 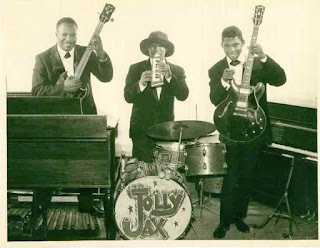