Jack Metnick (The Man From Mars) 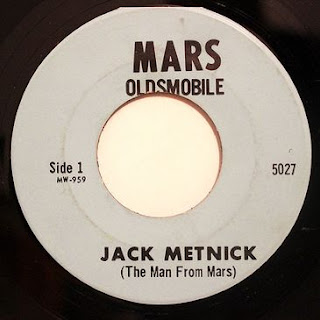 Jack Metnick
(The Man From Mars)

Chicagoans who tuned into radio or TV in the 1950s and 1960s likely remember the inventive, offbeat car-dealership advertising pioneered by Jack "Bubble-head" Metnick.

Mr. Metnick created a rocket- fueled marketing campaign in an era in love with all things space- age. He named his Oldsmobile dealership "Mars" and billed himself as "The Man From Mars."   His commercials  — for the first Jewish owner of a General Motors Oldsmobile Division franchise —   pioneered wacky car advertising with lines such as: "Crazy Bubble-head has just landed from Mars with three antennas coming out of his head. … Mr. Metnick delighted young visitors to Mars Oldsmobile, 5027 W. Madison, by donning a space helmet in the showroom. 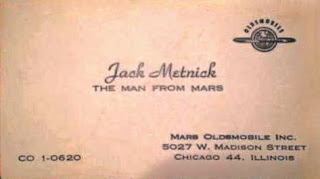