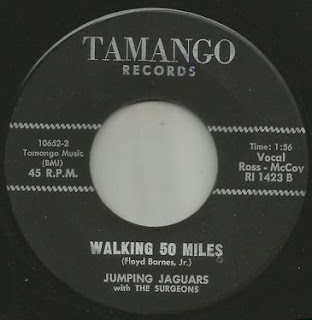 Baltimore group active between 1958 and 1964. This is probably the group managed by June Morton, the once vocalist with Duke Ellington in 1950, mentioned in the Stuart L. Goosman book  "Group Harmony: The Black Urban Roots of Rhythm and Blues"

The Jumping Jaguars were featured in one Flink Johnson (a well known regional combo leader) Benefit Dance & Show on February, 25th 1963 along with The Man with the "Golden Voice" (Ricko Lawson The Magnificent), Pop Ditty & The Surgeons and exotic dancer Princess Shelly.

The Surgeons are probably the group better known as "Pop Ditty & The Surgeons" who recorded as The Kings on Jax (1953) and Harlem (1954).  [see Marv Goldberg]

Tamango was probably named after the french movie directed by John Berry, a black-listed American exiled himself to Europe.    The film was controversial in different parts of the world. France banned Tamango in its West African colonies "for fear it would cause dissent among the natives".  The film was released in 1959 in New York City, but didn't receive nationwide distribution until 1962. The United States government had banned Tamango because it broke the race-mixing (or "miscegenation") section of the Hays Code with the interracial love scenes between Dorothy Dandridge and Curd Jürgens. [Wikipedia]