Yeah Yeah All The Time 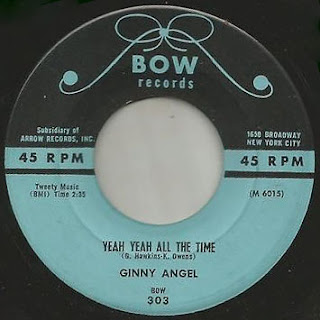 Yeah Yeah All The Time


Composer K. Owens is Kelly Owens a prolific New York session man who played piano on, and arranged  numerous R&B and pop sessions.
Composer G. Hawkins is Gloria Hawkins.  As the Gloria of "Roy and Gloria" (with Raoul Cita who had left The Harptones), she waxed a couple of records for Deluxe including the original release of "So Good, So Fine" (although the Harptones had already recorded an unreleased version).

Texas native Virginia L. Angelo had showed interest for art, music and songwriting while still a student at the Baylor University in Texas.  In 1952 she composed words and melodies and played the piano for "Pot O'Gold" with fellow student Gordon Hall, who directed the show,     Later that year, in November, she played in “The Proposal,”, a Chekov play., incarning the daughter of Stepan Stepanovitch Chubukov, the determined landowner,

Virginia Angela came to New York in the mid-fifties.  Her first recording was on Morty Craft's Melba Records.

Ten years after her first record, she was still in New York.  According to Sally Derrickson, Evening Independent reporter, who was the guest of "To Tell the Truth", a game show, in 1965  :

One contestant was Virginia Angelo, 31, from Tyler, Texas who hadn't lost her y'all accent in the 10 years she'd lived in New York City.  In real life she is a private secretary, a night club entertainer and quiz show contestant.  She has appeared on 10 programs, she said, and she was counting on this one to pay her rent