I Found Salvation in my Death Cell 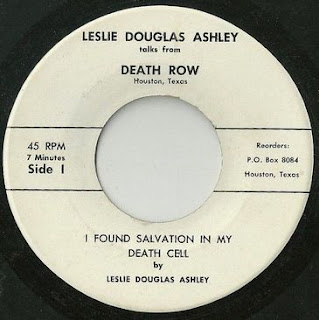 
"Leslie Elaine Perez, formerly Leslie Douglas Ashley, has seen her fair share of troubles. She first made headlines back in 1961 during a lurid Houston sex-torch murder, when, as a young male transvestite, he and his teenaged prostitute girlfriend, Carolyn Lima, shot Fred A. Tones after a three-way sexual encounter went bad. Panic-stricken, they burned his body, then led police on a three-week chase through Mardi Gras in New Orleans all the way to Hell's Kitchen in Manhattan before they were captured."

"Their Houston trial was a circus. Spectators fought over gallery seats to hear X-rated testimony. News headlines blazoned "Gun-Torch Murderers" and "Beatnik Killers." Houston, a city steeped in Bible Belt tradition, with a hefty appetite for sin, reveled in this wicked story." "The judge would not allow the defense lawyer to enter evidence discovered about the victim - a religious family man, but a Jekyll-Hyde type with a second identity and an arrest record. The defense case collapsed. Leslie and Carolyn were sentenced to death by an electric current."

"A new legal team learned the D.A. hid psychiatric reports supporting an insanity plea. A last-minute reprieve saved Leslie and Carolyn on the eve of their execution. At her retrial, Carolyn blamed everything on Leslie. Carolyn was sentenced to five years; Leslie was sent to a mental institution. He soon escaped and made the FBI's "Ten Most Wanted List." After six months at large, he was captured working as Bobo the Clown in a traveling carnival."

"Leslie was convicted again but sentenced to fifteen years in prison. He was released after five years of chopping cotton in Texas prison farms. Once free, Leslie got the sex-change operation he had always wanted. His mother, Sylvia, paid for it." "When Leslie Douglas Ashley became Leslie Elaine Perez, in the eighties, she also became a political activist. Before her sordid past was revealed, she earned enough votes to make a runoff for the chairmanship of the Harris County Democratic Party in Houston in 1990.

She has since been active in the AIDS awareness campaign and has also participated in demonstrations against capital punishment." "For the past thirty years the media has fed off Leslie's bizarre life and has persecuted her as a social aberration, but Robert Bentley, for the first time, gives her whole, uncensored story in Dangerous Games." "Leslie, a survivor, mixes in her life the macabre and slapstick humor. And her down-home sweetness makes her one of the most charming killers you'll ever read about."--
Book summary
Dangerous Games: The True Story of a Convicted Murderer on Death Row who Changed His Sex and Won Her Freedom
Robert L. Bentley; Carol Publishing Group, 1993

This page has a detailed story with newspapers clips and illustration, and including the audio file 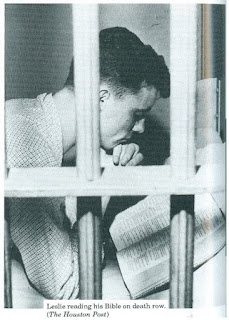