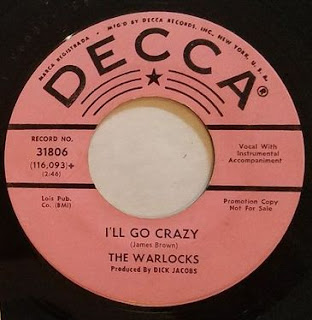 Bob Hollicker, a six-year old young toddler threw a fit one day  Mother Charlotte decided to write song lyrics based on his actions. Father Joseph wrote the music. Their song (and dance)  titled "The Temper Tantrum" were introduced in May 1965 at the Forum, a Boston discotheque.   It received exposure on Boston radio and TV stations and in the local press. Alan Ross of Decca Records secured tape of music and film of the dance and sent it to New York.

The next day the Boston press and radio-TV carried the message that this was the dance to do in Boston and the surrounding areas. “The Tonight Show” heard about the excitement generated by the dance and showed a film clip of the steps of the “tantrum” to a national viewing audience. At the same time it was brought to the attention of A&R staffer Dick Jacobs, who immediately flew to Boston to record “Temper Tantrum” with The Warlocks, the musical group that first introduced the dance.

The Decca record was cut, mastered and shipped all in the period of three days to keep pace with the national excitement being generated by the fad.  Charlotte Holicker made a guest appearance on “The Mike Douglas Show” to tell the story of the dance to the show’s vast syndicated audience.


I've not be able to found a video of the original dance.  However, a similar dance also called The Tantrum was featured in "The Cool Ones," a 1967 spoof movie of '60s teenage music TV shows like Shindig! and Hullabaloo.  You can watch it here
♬


At DeadWax, we are not going along with the crowd and we prefer the flip side, a cover of James Brown. The top side is available on YT anyway...