Sonya And The Capris 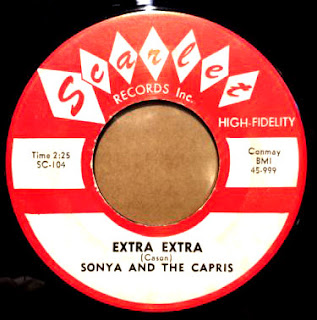 Label owned by Noel Ball, Nashville's first and most flamboyant rock n roll disk jockey. Noel Ball produced the two following singles in 1961 on Sonya at the FAME Studios in Muscle Schoals and issued on the Dot label (Noel also was the head of the Southern Division of Dot Records) :

Sonya who? Her last name remains unknown and no info has be found.  Unknown as well are the  Capris apparently unrelated to the many other recorded Capris.