Since I Met You Baby 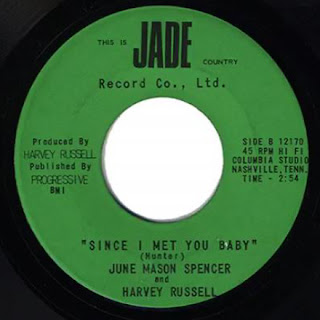 Since I Met You Baby


Recorded at the Columbia Studio in Nashville, Tennessee. June Mason Spencer, on this Jade label owned by Harvey Russell, is unknown to me.

Singing Cop - was all you needed to say in 1960s Akron. Harvey Russell was a cop, and a singer, and in the polarized world of the mid-late 60s, a cop who sang rock-n-roll.  See buckeyebeat

Harvey had started singing in local pop vocal groups including the Wonders (who recorded a 45 on Reserve). In the early 60s he continued to sing 'solo'. He had a local hit with "Out of My Teens" on the Vicki label.
Posted by Bob at 6:49 PM