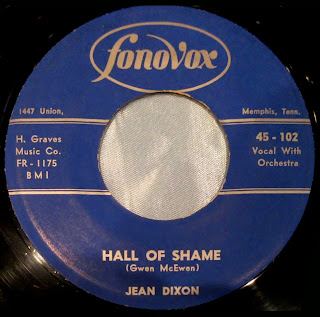 Elston Leonard was the founder of Fotovox Inc., a TV and commercial film producing firm, in 1951 at 1447 Union.
Hillburn Graves (1913-1973), was a saxophonist and clarinet player from Arkansas.  He toured extensively from more than two decades with the "Pappy Graves Show"

Gwen McEwen was best  known as a comedienne. She traveled for many years with Pappy Graves ("Pappy Graves Music and dancing Revue, featuring riotously funny Gwen McEwen, That inimitable "Phyllis Diller" Gal ! ")  She never made a career for herself in music, although she recorded few demos at Sun Records ("Steady Freddie" and "We"ll Have A Ball" were issued by Bear Family in 2002).   She wrote both sides of the Smokey Joe 45 on Fonovox, the only other known release on the label.
Jean Dixon is perhaps the former band singer who was associated in Dallas with the Hugh Fowler Agency in 1958-59 (Billboard, 31 August 1959). No further info.