What Will I Do 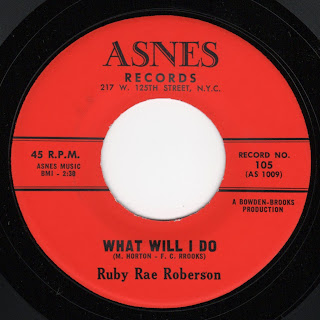 Sweet Ruby Rae's second single for the label. which according to address was located just down the street from The Apollo.  Its owner was probably Frennie Brooks (F.C. Brooks).  This is one of the earliest John Bowden production.

John Bowden, a gospel record producer, A&R and promotion man, was very active in the 1960s and 70’s and is most famously associated with HOB, a gospel label affiliated with Scepter Records, New York.  But his name appears also on obscure early sixties labels such as Ark, Rejo and Revelation, the latter co-owned with Bobby Robinson (Fire/Fury Records) and Clarence (Fats) Lewis. 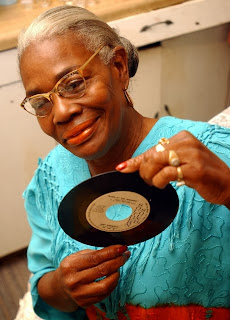 Ruby Rae Roberson was born in Itasca, Texas.  She studied at Paul Quinn College, a black college located in Dallas.  She was 22 the day she auditioned in the Waco Coliseum.for Ray Charles who was then searching female singers for his newly formed vocal backing group, The Raelettes.   Ruby Rae spent two years with the Raelettes, from 1959 to 1960.   When her musical career was over, she came back to Texas where she worked as a school music teacher for the rest of her life.
In 2007, she published her recollections  : “Ruby’s Early Life: Ray Charles My Memories As A Raelette”